It’s 2020, which is the year of perfect sight, hindsight and Barbara Walters. If you get all those references, you’re cool. If not, looks like you’ve got some Internet searches to do.

Raise your hand if you thought we’d have flying cars by now. Sorry, The Jetsons are post-apocalyptic, so you have to wait for the apocalypse. And so are The Flintstones. I read that somewhere; it’s got to be true.

A lot of people make New Year’s resolutions. I don’t. I’m in a constant state of knowing I need to get better at most things and attempt to do so at random intervals and at varying degrees of fortitude.

One of the things I am trying to do better at is controlling my weight. Few people who meet me think that is an issue. But you didn’t see me 25 pounds ago. The herniated disc, which I place curses upon every fourth of fifth day, caused inactivity many years ago. The poor diet was caused by me eating bad stuff. I actually dropped 30 pounds (more than two stone if you’re using antiquated weight terms in the United Kingdom and such places that-a-way) before quitting the day job on Sept. 27. Within two months, six of those pounds reappeared (those jerks!).

Oh, I also want to read more. The last book I finished was “How to be an Antiracist” by

Ibram X. Kendi. A very good book. Lots of history, introspection, stuff you probably don’t expect. I didn’t! It’s been a while, and I need to start another book. At right are some I have on my shelf. I also have some on Kindle. If you want to write well, you need to read well.

One of the methods I use to control huge weight gain is by walking. I use an app to map these walks, so I can make fancy designs, write my name in the snow, and make naughty things. I only share the G-rated shapes on social media. Here are a few recent ones: 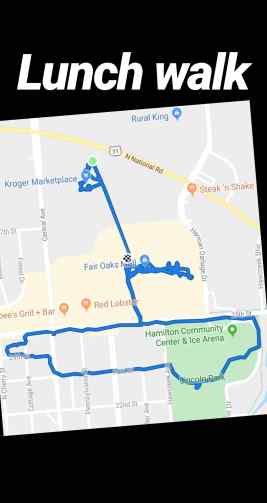 Wisconsin for the holidays

Speaking of weight gain, the challenge was real over Christmas, part of which was spent in Wisconsin, home of my youth. My mother and father,

bless their little pea-picking hearts, enjoy force feeding me candies, chips and dips, and other assorted food and beverage. Yes, I said “force feeding” and I am sticking to that assessment. Just look at that delicious icing-covered pastry to the right. Look at it, I tell you! This is called Kringle, and while extremely tasty, it is not so jolly to my hips … and belly. And I HAD to eat it. Screwdrivers and Plumbers Helper were employed. At least this is my belief. I will stick with this story for all of the days!

I also had a lovely pizza while chatting with former schoolmates at Colonel Hart’s, an establishment in the heart of the Wauwatosa village. A photo that you saw at the top of this newsletter is proof that I was indeed there.  I’m the guy way in the back with the gray hair and goofy grin. My wife is across from me, pretending to enjoy my company. There are assorted old friends and spouses in there, as well.

While in Wisconsin, I did walks in my hometown of Wauwatosa. But we already talked the walks, so the time is nigh to try another topic.

Many things have been happening on the writing thing, which is good since I have

chosen to devote most of my resources toward that. There have been a few sales of books at malls and craft and hobby shows. I managed to stare at a Victoria’s Secret for nine hours one day late in December while selling books at a kiosk in Greenwood Park Mall staffed by Indiana authors. It’s not my fault; that’s the direction my table faced. Truth be told, the Victoria’s Secret part of the deal wasn’t all that exciting. It might have been had I been 12. But I got to meet lots of groovy people, including some I already knew who showed up just to purchase one of my books.

Oh, and the main reason I am no longer a journalist. I am feverishly working on my novel, “3 Months in Dublin.” By saying that, I hope you do not get the idea that my forehead is in a constant state of overheating. No, I am working hard. Well, except for that week over the holidays. I kind of didn’t do anything book-related during that time, except perhaps mull things over in my giant brain.

Topics I have broached in the past month include:

What’s next, you may ask? You may not ask, too. That’s OK, this is America; you have that freedom not to ask what is next.

Well, I will spill my guts nonetheless. Um … more writing on all things Ireland, more

Packer games (we Packer fans hope there are more than one left), my wife’s birthday at the end of the month, and other things that wouldn’t interest you. I am making quite a large assumption there.

OK, I need to go now. I’m hungry. See you in February.