Well hello there, faithful followers, inquisitive types, and those who accidentally stumbled in thinking this was going to give you guidance on dealing with the 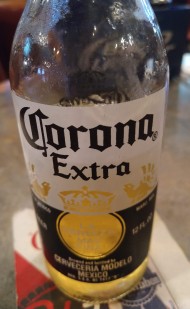 Coronavirus (not anything to do with beer)

Let us get right to the coronavirus. In order to prevent the spread of this thing that seems to be spreading like other viral things, it is advised you do all the hygienic stuff you were supposed to be doing all along. Oh, and drinking or not drinking Corona beer will have no effect on this thing. I tried to build up immunity by drinking a Corona (Extra, not light) the other day. I’m not sure it helped. See? There it is over there. To the right. I advised myself to take two and call myself in the morning. Okay, yes, I had two. With a tasty little chicken burrito and chips. And then, I went to a movie, which was around the block.

Speaking of the motion pictures, my wife (Kimberly S. Hoffman) and I saw “Lover Come Back,” which features Rock Hudson and Doris Day in 1961. Lord, it’s older than I am even! It’s also got that one guy from the Odd Couple, the maid from the Brady Bunch, and sexism. There was an

audible gasp among the audience at The Historic Artcraft Theatre in beautiful Franklin, Indiana, when Doris Day says to Rock Hudson not to wash the dishes because that’s women’s work. I nearly spat out my buttered popcorn, which is grown five miles away from the theater at Norton Grain Farm (the popcorn, not the butter). They give away fabulous prizes at the Friday and Saturday night shows if your ticket is drawn. On this night, my ticket was drawn, and so was my wife’s. Double prizes. We totally freaked out. There was pandemonium I tell you, and allegations that the fix was on. You can see what we won right over there. To your left. You can do it. Just move your eyes. In case you’re wondering, they’re not dolls, they’re action figures.

Soon, it will be our turn to give away prizes as we are prize sponsors for the movie “Spartacus,” starring Kirk Douglas, who lived to be 103 years old. This movie will be shown in April. I have some prizes picked out already. This is gonna be great!

Be amazed at all the awesome movies they show at the Artcraft by checking the entire schedule at the website; just click here.

Speaking of fun, my wife and I have recently attended plays, comedy shows, other movies at the Artcraft and at home, and have been binge watching the nerd spy show, “Chuck” when we have time in the evening. We also went to the freaking opera!

We saw “La Traviata” at the Indiana University Musical Arts Center on Leap Day. The

festivities included lunch at the Owlery restaurant in Bloomington, where we were informed that my stepdaughter and her boyfriend were now engaged to be married. I also had vegan poutine, regular grilled cheese with tomato and spinach on a lovely, crunchy bread, and a chocolate chip cupcake with decadent chocolate icing.

We saw two plays in February: a murder mystery at Boggstown Inn and Cabaret called “Let’s Have a Weddin'” and a hilarious look at death and doughnuts at The Harlequin Theatre in Columbus called “Gladys in Wonderland.” Friends of ours were in both plays, and we enjoyed every single moment.

I also got to speak a line in the murder play.

They picked out three gentlemen from the audience ahead of time who they knew would deliver a line with the proper vocal tone and believability. I nailed it. My line was, “I also have fertilized that Garden.” See, you’re stunned! And you want to know why “Garden” is capitalized. Because it’s a proper noun; it’s the name of the girl who is going to get married. And now you see the depths I have sunk to gain fame and notoriety as a thespian.

We saw comedian Costaki Economopoulos at The Harlequin. This is the second time we have seen the man with the very long last name, and we chortled and guffawed profusely. Did you know that his birth name was Constantinos Christos Vassilis Economopoulos? Well, that’s what it said on Wikipedia anyway. So who really knows? But if this rumor is true, holy moly!

We also recently saw a man at our bank, too. So, if you want financial advice, I am pretty well initiated in those things now. And I’ll only charge a nominal fee.

Ailments of the Month

I stole this category from Marian Keyes, a brilliantly, sweet, funny lady and great author whose newsletter I signed up to get in my email inbox (hint, hint, wink, wink, nudge, nudge). But her newsletter this month listed no ailments. Not wanting the newsletter-reading public to miss out on an ailment, I offered to make up for Marian’s good health. Aside: I heave heard that her new book, “Grown Ups” is fantabulous.

Apparently, “at my age,” stuff happens. This month, I got headaches and ear buzzing things. It’s like I’m continually going up in an airplane and all the swallowing in the world does not relieve the pressure. Stress-related, my doctor says. Get your heart rate up, my doctor says. Exercise, eat right, wash your hands, he says. I’d like to send him to give him a case of the ear things, I would.

balloons that inflate. “At my age,” if I sit too long at my desk, it is possible blood will go down my legs, but not back up so much. Get up, move about, my doctor says. Elevate your legs, my doctor says. Wear compression socks, he says. I’d like to sock him in the compression.

As I exercise more, I may have to go from walking to jogging or swimming or biking. Something that taxes my body, soul and spirit to the point I wish I would have stayed in bed. I am wondering if (and I

have already biked a 4.5-mile ride once recently) that I will not find as much money on the ground by going faster. I think I shall need to make a concerted effort to keep my head up and avoid people, cars, bikes and street signs. And money on the bottom of swimming pools? Really!

I’ve been tracking found money by month for just over two years. January’s haul of $2.56 was the most for any month except for the time I found $16 just lying there last September and the month I found two German euros on the floor of the supermarket in November 2018.

I am still reading #KnowTheTruth by Gordana Biernat. This is the same book I was reading when I penned my previous newsletter. I am thoroughly enjoying it and am studying it closely, which is why I have been so slow. But I hope to finish in time to tell you I am reading a different book next month.

I have been fighting my first novel, “3 Months in Dublin.” This is for several reasons, chiefly that it is my first novel (those nonfiction books I’ve got published were so much easier! Well, the second one was a tasty piece of cake. The first one went sort of like how this thing in Ireland is going).

I keep discovering that I should have done it this way or that way, or I forgot to keep track of this or that, and then I go back and revise things instead of plowing ahead and writing a bunch more that would need to be revised a lot later on. It’s six of one thing, a half dozen of another. This method pushes back the completion of the first draft, but hopefully will cut down on the time needed for drafts two, three, four, and twelve (I’m skipping five through eleven on general principle).

Although with all this revising and editing as I go along, with the first draft really be a first draft? Maybe I will call it the first-and-a-half draft when I get to the part where it ends. Oh, no. I hope I just didn’t put in a spoiler!

If you’re interested, you can keep up to date with my progress at the following Facebook sites, as well. I put up some different posts, usually a bit more often. Maybe you’ll see more photos, who knows. It might get crazy:

In case you want to see some of the places I’ve been working (because let’s face it, some of you are enquiring types), here are some photos of my wife’s laptop and coffee at various coffee shops. You’re so welcome. 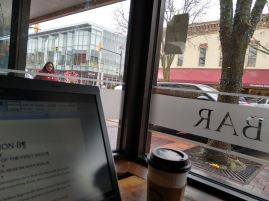 And because you want to see a photo of me in front of a promo for karaoke, I provide 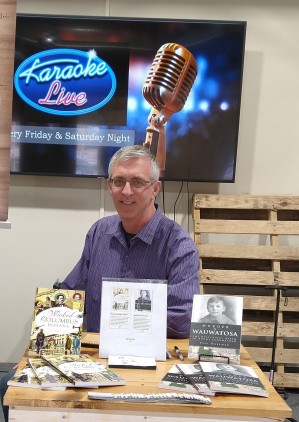 that photo, too. This was taken by my wife when I did a book signing at Books & Brews on the south side of Indianapolis on Feb. 22. I in no way endangered the lives or ears of anyone in attendance by attempting to sing. I was packed up and gone before the karaoke person set up their karaoke stuff. I might have sung to myself in the car on the way home. There is no proof, though; I destroyed it “Mission Impossible” style.

And speaking of public appearances, my wife and I were invited to mold our nation’s youth by speaking to a group of middle schoolers about writing books last month at Columbus Signature Academy – Central Middle School.

The students were working on historical fiction books based in the U.S. Civil War time period. We offered pointers on how to do things like and answered questions. The teachers sent us what the kids had written, and a few of us local author types gave feedback. The response from the reviewers was quite positive.

And, as a bonus, one of the girls drew a sketch of me and my wife during our presentation. I provide that here free of charge.

Well, let’s see. I need to cure all my ailments. Or at least come up with a different one in case Marian Keyes hasn’t got one next month, too.

I got involved in two fantasy baseball leagues, so drafts for those endeavors are coming up shortly. Baseball season. Warmth. Spring. Yay!

Oh, I get to do mock interviews with journalism and marketing students at Franklin College later this month. I’ve been doing this for years through their leadership program and thoroughly enjoy meeting with such outstanding kids. I ask them the tough questions like “Why in the heck would I want to hire the likes of you?” and “What will you be doing in five years at this exact moment?” It’s good to keep them on their toes and/or on pins and needles.

Author events in March are:

I think that’s more than you WANTED to know. But, you know, there is a difference between need and want.

So, have fun setting your clocks ahead an hour on March 8. and losing an hour of sleep and I’ll catch you all up next month. But there might be posts before that. You never know. What’s life without whimsy?